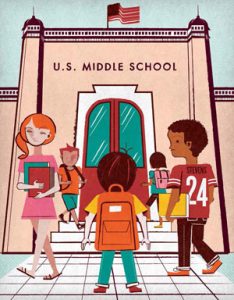 Many of us can recall at least one middle school experience we suppress. Middle school can be a difficult time for students both educationally and socially. It can also be a challenging time for teachers as well. In general, students within the middle school age group are going through various developmental stages, which can trigger some of these problems. For example, socially students become more aware of popular trends; unfortunately, those students who do not meet the cool standards of middle school peers can become outcasts. So, what can we do to make the middle grades an all-around better environment? Well, some solutions could include, bringing back K-8, or block scheduling.

As I stated before, the middle grades happen during crucial developmental stages in adolescence. Because of this, middle school proves to be a difficult time for many students. There are physiological changes occurring during this time such as puberty.

In addition to the physical changes, the social pressure middle school children face can be overwhelming. According to Psychology Today, there are five social cruelty behaviors that become more common in middle school. These behaviors include, teasing, exclusion, bullying, rumoring, and ganging up. (Social Challenges of Middle School, 2017). The article goes on to say that young people strive for social membership, and those who are labeled “different” than the norm, are targeted. The transition to a middle school with a high school like setting, may be too sudden for the children in this age group to handle. In the article it was also stated that, within this age group, common school experiences can be exaggerated by insecurity and emotional vulnerability, so that even small incidents can cause a lot issues. Grades 6th through 8th should not be looked passed; this leads back to the question, what can we do about the middle grades?

According to an article by Harvard Ed. Magazine, until the 20th century schools were primarily K-8. However, due to growing enrollment junior high schools, which generally consisted of students in grades 7th, 8th, and sometimes 9th were formed (Do Middle Schools Make Sense, 2012). The author of this article goes on to say that in the 1960s schools started to move away from junior highs and started the creation of middle school.

Do Middle Schools Make Sense goes on to say that, in the article Education Next, West says, re-locating to a middle school causes a “substantial drop in student test scores” in the first year. The achievement continues to decline of the years spent in such schools. To add, having middle school configurations puts a disadvantage on subgroups. The article states that, “Black students in particular, demonstrate large relative gains in math achievement prior to entering a middle school but then suffer larger drops both at and following the transition.”

What the research shows, K-8:

Every child must go through the middle grades. Developmental changes and puberty will always make these grades primarily tougher. Are there solutions to make middle grades better for these students both educationally and socially? I have found some interesting statistics on K-8 research. In an article for Educational Northwest, the author states that, several studies have indicated that the  middle level grades 6th, 7th, and 8th, have higher achievement in K-8 schools than in middle schools (What the Research Says, 2011). This author goes on to say that 9th graders from both K-8 and middle schools have similar test scores by the time students are in 9th grade. This is showing that once students reach this age group, they are ready for a high school like atmosphere. Students in K-8 were able to have an enjoyable middle grade experience and continue to do well educationally.

The benefits of block scheduling: 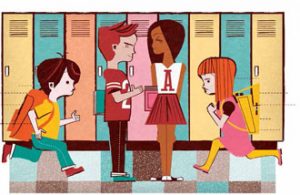 Students would benefit from longer class periods because they would be able to engage in the learning process for longer periods of time. In an article for the National Education Association, the author stated that a middle school in Minnesota switched from nine 44-minute class periods per day, to four 90-minute class periods per day (Are Block Schedules the Stress-Buster Students Need?  2016). This block scheduling works, even the school’s literacy teacher felt that, “we have less behavioral issues because there’s less chaos in the hallways. The pace just seems to be little different, a little slower.” After observing in a middle school for twenty field observation hours, I can say that the most chaos happens in the halls. From my observations, middle grades may not be ready to switch classes every hour in the day. With block scheduling, students can adapt to a high school like atmosphere, yet have longer time in the classroom, which may be exactly what they need for their age group.

Students in grades 6th, 7th, and 8th are going through a hard time adjusting due to puberty and other developmental stages. Middle grades are essential in learning, and sending children to middle school configurations may be putting them at a disadvantage. Looking back at K-8 and the achievement students made in the middle grades, is enough to consider going back to this school arrangement. Although in bigger communities an over population enrollment issue could be a concern, schools can simply look at rearranging their curriculum to block scheduling. Block scheduling will ensure longer class time where the middle grades engage fully in 90-minute classes rather than 40- 60-minute classes and less hallway time. With the benefits K-8 present, and block scheduling, proves that this could be the right switch to helping the middle grades achieve at their full potential and solve some of the bigger problems they face.