Rachel Shoebridge has written a Brocade using the emotion words Love and Kindness in connection with the photo below. 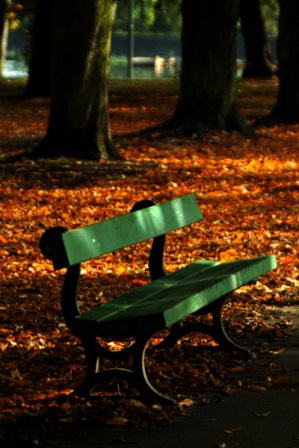 Walter sat in silence as he took in every beautiful moment before his bright green eyes. The crisp air whistled around him as the leaves floated down gently caressing the ground beneath his feet. Red and orange and yellow swirled all around the beaten bench, green paint chips peeled back showing the bare skin of the wood where it was once covered.

Suddenly, a figure startled Walter out of his daydream as a woman sat on the old bench next to him. Her clothes were tattered, she wore only filthy socks that were once white, her hair was in knots, and an overflowing dumpster-like odor wafted off of her into Walter’s nostrils.

For a moment, Walter’s stomach dropped to the leaf-covered ground below his feet. He knew he had to do something for the woman. Without further thought, Walter jumped out of his seat, removed his lightly worn moccasins from his feet, and placed them in front of the poor old woman. She looked at him in awe for a few moments before a smile spread from ear to ear. He continued to give her his pullover sweater and then made the woman the offer of a lifetime!

“How would you like to work for me? Everyone deserves another shot at life”

Although the smile never left her face, somehow it managed to grow larger as tears filled her big brown eyes. Just that, was enough of an answer for Walter.