Ashley Ramirez has written a Brocade using the emotion words Love and Anger in connection with the photo below. 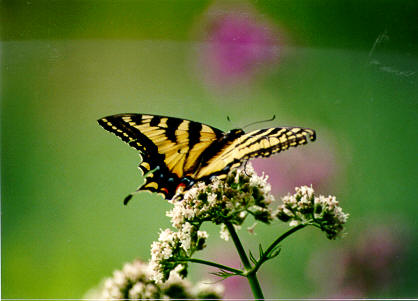 To him, winter days don’t exist anymore. The infinite bitterness has gone with the seasons. The arrival of spring brought along hues of dandelion yellow, cherry blossom pink, ivory white blooming flowers to the meadow that was once covered in snow.

Her presence led to this awakening. If today was his last day to live, he would want it to be with her. Spending their time together, strolling hand in hand through the meadow of flowers. Taking in the warm breeze of the romantic evening, he says nothing to her but appreciates her presence next to him. Holding her and keeping her safe. To him, this was home. He was her the flower, and she was the butterfly.

But everything comes and goes, and he doesn’t want her to disappear. Every small flutter of her wings takes her further and further away from him, making his eyes glow red. As if that wasn’t enough, the false promise of a happily ever after clutches him by the throat, suffocating him. Consumed by his thoughts, he tore the wings from his butterfly. His once scarlet red had died down to midnight blue. And when she was gone, a pitch black.