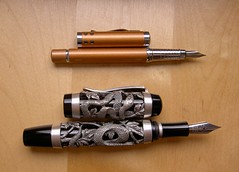 I don’t understand it really, but I seem always to think about fountain pens.  I just love that they work by “breathing” air and ink; that they have visual and tactile beauty (some are truly works of art); that they are symbols of an activity that makes us human and civilized; and, of course, that they allow each person a measure of power, the ability to simultaneously discover and express the self in words.

Fountain pens are better than ball point pens because they not wasteful–one does not throw away an Aurora or a Visconti or an Omas when it runs out of ink.  One tosses out a million Bics for every fountain pen that is lost to the non-negotiable demands of aging.

Also, there is no doubt that a variety of inks, which can only be enjoyed by fountain pen users, is a tremendous aestehtic advantage over the dulling realities of the sticky blue and black glop available in most cheap ballpoints.  Whoever heard of a ballpoint pen serving its master’s page “Ottoman Azure” or “Buttercup”?

There is also the virtue of commitment in a fountain pen’s ink, for, unlike ballpoints whose inks can be erased, fountain pens use dyes that are not easily removed.  Some inks, notably Noodler’s, are absolutely indelible because they chemcially bond with the cellulose in paper.  Thus, when writing with a fountain pen, we cannot squirm away from the words that embarrass us or which are politically incorrect or offend those we otherwise care about.  We commit to who we are at the moment the pen touches the paper.  The computer, which I love (truly, I do), seems to have taught us that we write to revise our writing.  But no. We write to revise the mind, and nothing but indelible ink makes that more clear.  There is no going back.  Every line is a one’s newest home.  We take up residence in our words, sometimes startled by the walls we have built.

People think I’m nuts to spend the kind of money I do on fountain pens, but, in my own defense, doing so subtly and postively affects me.  When I write with an expensive pen that I must take care of, that I must nurse, that I must look after as I would a child, I derive a certain spiritual benefit that in turn affects how I write.  I must respect the pen.  It pulls at me, demanding my constant effort, discipline, and faith, and above all, a willingness to live into the unknown, to go into my darknesses, just as paleolithic humans entered their black Lascauxs 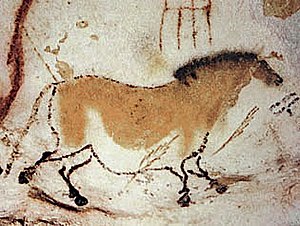 with ocher-damp sticks and revelled in the thick actuality of their lives.

If you want to write, do it with a fountain pen.

3 Replies to “Fountain of Thought”