I’m pleased by the clarity and concision of the following article from the Nation of Change website:

Why It’s a Privilege to be a Progressive in 2013 | NationofChange.

But I just can’t help attempting an answer to the question asked at the end of the article, and which is, I think, important:

Research shows that conservatives will “rationalize away social inequalities in order to justify the status quo.” They are orderly and moralistic and dependent on authority. Liberals, on the other hand, are more open to new ideas and experiences, probably because they have more of the gray matter that helps to manage complexity in the thought processes.

..Why do we lose the wars of language and emotion to the conservatives?

First, I should say that I don’t believe that liberals are “losing the wars of language and emotion to the conservatives.”  In general, I sense that the daft, over-simplified kind of thinking that leads to, say, the denial of global climate change or ludicrous pronunciamentos regarding women and pregnancy, is slowly being exposed for what it is: junk thought that everyone ought to ignore.

But why is there such a polarized disconnect?  I’m not a social science expert, but I can only imagine that whole galaxies of reasons exist.  What I’m fascinated by, however, are neurological explanations.  Using science in this way is certainly no more than conjectural exercise, but a compellingly consistent picture of neural diversity is being painted that we ought to pay attention to.

We could look, for example, at some fascinating research that has been done correlating brain structure and political attitudes.  Summarizing one study, Joshua Holland writes:

Looking at MRIs of a large sample of young adults last year, researchers at University College London discovered that “greater conservatism was associated with increased volume of the right amygdala” ( $$). The amygdala is an ancient brain structure that’s activated during states of fear and anxiety. (The researchers also found that “greater liberalism was associated with increased gray matter volume in the anterior cingulate cortex” – a region in the brain that is believed to help people manage complexity.)

Additional studies corroborate and replicate this connection, suggesting why it is, particularly from a liberal point of view, political conservatives seem to think re-actively rather than rationally, simplistically rather than complexly.

If liberals are losing the culture wars, it is not because liberal thought is somehow inherently flawed.  It is because brain structure leads to ideology, and–to take that idea to the next, wildly over-simplified level–that means some of us are born with a neural morphology that leads to–well, a desire to join the NRA or the Tea Party.

If this were true (and it’s a big “if”), then liberals, if they are to remain loyal to their social values, should stop condemning conservatives for their lack of empathy; or for their refusal to acknowledge the actual complexity of our social and environmental problems; or for their unwillingness to develop truly thoughtful, equitable, nuanced proposals for social change.  The conservative brain that produces reactionary, black-and-white bloviating is just another form of neural diversity.  Conservatives are complete, whole, and perfect just as they are–just as are blacks, illegal aliens, Muslims, the disabled, the gay, the transgendered, women, and so on.  If liberals wish to consistently champion and celebrate the inherent worth of human racial, religious, sexual, and gender diversity, then they must also celebrate the neural diversity of their conservative brothers and sisters.

Celebrating, rather than condemning, some forms of neural diversity would be liberals’ ineluctable choice were it not for another fact of neuroscience: neuroplasticity.  You see, neural diversity exists in an enormous range of forms in part because brain structure is not a static thing.  And changes to its form and function occur to a greater degree and at a faster pace than most people realize.

A rotating animation of the human brain showing the left frontal lobe in red within a semitransparent skull. The anterior cingulate cortex (ACC) is sometimes also included in the frontal lobe. Other authors include the ACC as a part of limbic lobe. (Photo credit: Wikipedia)

For example, numerous studies have shown a strong correlations between changes in brain structure and the deliberate attempt to cultivate positive thoughts (as in metta meditation) or in the “open monitoring” practice of mindfulness.  Those changes result in reduced amygdala density and correspond to a reduction in stress rumination, as well as in a thickening of those portions of the brain responsible for higher order thinking skills, empathy, and self-regulation.

In other words, the brain responds, functionally and structurally, to predominant mental activity.

Incidentally, the mention of “higher order thinking skills” above reminds me of the Texas GOP’s explicit opposition to “the teaching of Higher Order Thinking Skills (HOTS)” which it viewed as “simply a relabeling of Outcome-Based Education (OBE) (mastery learning) which focus on behavior modification and have the purpose of challenging the student’s fixed beliefs and undermining parental authority.”  In other words, obedience is preferred over independent thinking. 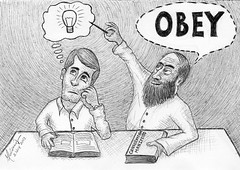 Never mind that the “founding fathers,” whom conservatives consistently revere, were highly independent, literally revolutionary, thinkers—and they produced the country that conservatives always claim to be defending.

The bottom line, therefore, is that the field of liberal tolerance does not have to include shoddy thinking just because it is born of another form of diversity.  It should, however, encourage meditation and mindfulness practices as a way to improve one’s outlook, one’s health, and one’s willingness to be good to others.  In this, I think, there is still room for conservative thought, perhaps the most conservative thought of all: cease from callousness to harmful behaviors, cultivate wholesome intentions, and act in ways that will benefit everyone.